In a speech on Monday at the Centre for London, the chair of the Airports Commission, Sir Howard Davies outlined the Commission’s current thinking on the underlying issue of whether or not there is a case for increased airport capacity in the UK. During his speech (transcript available here), the first public event by the Commission since AEF gave evidence at public sessions in July, Sir Howard considered four arguments against the need for new runways in the South East before announcing that the Commission’s provisional view was that new capacity is needed to serve the area. The Commission’s interim report to Government is due in December. 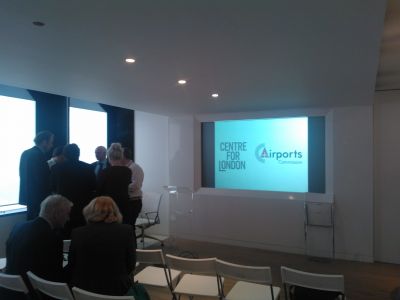 The four main arguments against expansion that Sir Howard Davies considered were:

Sir Howard Davies acknowledged that there have been issues with past Department for Transport demand growth forecasts. But he concluded:

“demand for air travel to and from the UK is likely to continue to rise over time, and that the weight of that increased demand is likely to remain focused on London and the south east”

“they (Eurocontrol) identify the UK as one country where capacity constraints will begin to bite sooner than elsewhere.”

Please see the AEF written evidence on this issue here.

He also said: “We may see a gradual increase in passenger loadings, but much of the potential for significant improvements has already been driven out as a result of low-cost competition”

Sir Howard then questioned what the future growth in aviation will look like (whether it will be leisure, visiting friends and relatives, or business) and he outlined that any future investment needs a high level of confidence that the new infrastructure would be used.

We outline how demand growth to a level which allows the UK to meet its climate change obligations can be accommodated within existing capacity in a report we produced with WWF.

On this issue, Sir Howard emphasised the uncertainty that has been caused by the recent decision at the ICAO Assembly in Montreal to limit the coverage of the EU Emissions Trading System while not guaranteeing a global deal in 2016.

On this, Sir Howard said:

“Some argue that, in the absence of any other agreed constraint, it is appropriate to hold down aviation growth by not building new airports and runways.”

He then stated that the Commission agrees with the Committee on Climate Change that aviation growth can take place and the UK can still meet its climate obligations. And that:

“The challenge… is to deliver the best solution for the UK overall, which has to be one that both achieves our carbon targets and delivers the connections that our economy and society demand”

Sir Howard argued that not expanding runway capacity in the UK could displace emissions elsewhere while negatively impacting the resilience of UK airports. The Airport Commission’s provisional view is that additional capacity is needed with a framework for managing emissions growth.

You can view the written evidence we submitted on climate change to the commission here.

The Airports Commission will present its update of the Committee on Climate Change’s analysis from 2009 on how aviation can meet UK 2050 climate targets with the findings of the Commission’s interim report. However, Sir Howard believes that not a significant amount has changed over the past four years.

Redistribute future demand growth outside of the South East

On this issue, Sir Howard concluded that the highest demand is in the South East and UK authorities are limited in their ability to influence the location to specific airports of flights.

In his speech, Sir Howard Davies purposefully did not pick out individual airport options and used this as a reason not to comment on local environmental issues such as noise and air quality. He did emphasise that they will play a key part when the commission considers the different runway expansion options on the table.

However, many of the questions from the audience were focussed on local concerns. Brendon Sewill from the Gatwick Area Conservation Campaign emphasised that there will be local environmental damaged caused by any expansion and so local environmental impacts should be considered as an argument against the need for greater capacity. The Stop Stansted Expansion campaign group highlighted the continued blight caused to thousands of people by the commission process of short listing options for expansion without a final decision before 2015.

Comments on the speech

It is possible to send in comments on the speech to the Airports Commission by emailing emerging.thinking@airports.gsi.gov.uk.